Art communities can be divided, however unintentionally, whether simply down to the physical barriers of geography, money, time or the lack of opportunities to gather together, interact and form diverse networks. Especially in the current art climate of funding cuts and commercial forces, these obstacles to communication seem only to sidle higher.

A frustration with these barriers has been felt by Plymouth-based LOW PROFILE, comprising of Rachael Dobbs and Hannah Rose (pictured, above). In their own position as artists, the duo recognise the necessity but difficulties in meeting fellow creatives. “Being an artist is really flipping hard and it’s so important to have allies who you can hook with up, chat to, share stuff with, ask questions”, affirms Rose. “There’s no way we’d still be doing things if we weren’t part of that wider community.”

It was through these values that LOW PROFILE first devised Jamboree in 2015. They brought 16 artists together in a gallery space, armed with a seminar programme and sleeping bags. The outcome? Perhaps a few sore backs in the morning but, more importantly, a wider emerging network of friends, collaborators and cheerleaders for one another’s work. Fast forward three years to Jamboree’s ambitious second incarnation, gathering 150 artists and curators together to camp on the rural estate of Dartington. After 18 months of planning – which Rose admits has been “full of pitfalls, mistakes, wrong turns and plummeting oh-fuck moments” – the four-day programme begins, betraying nothing of the behind-the-scenes chaos.

“Collective manifestos are shared as a group”

The programme itself is non-hierarchical in every sense; built collectively by the attending participants, it consists of pecha-kucha presentations and walk-and-talks, dissolving those physical parameters found within traditional classroom environments. The first day takes on a slightly more guided approach in the form of five presentations. Alistair Hudson, Simon Morrissey, Sonya Dyer, Lucy Day and Ingrid Swenson essentially ‘pitch’ themselves to the audience, teasing what they will explore more thoroughly in seminars the following day. It is in these seminars that initial dialogues of collectivism, fundamental social making, power and future are spoken. In Sonya Dyer’s seminar, three groups explore imagined futures: for the now, in 50 years, and in seven generations time. Collective manifestos are shared as a group, surfacing themes of trauma, social housing, education and transformation which quickly turn to more personal experiences and stories.

Sarah Scaife (below), an artist currently undertaking an MA at Plymouth College of Art, takes a keen interest in the potential of transformation, of “reimagining the world, giving image to new possibilities and bringing those possibilities to life.” Her art practice revolves around liminal experiences, for which spoken language can so often fail to suffice. “For example”, she says in a gentle tone, “there are scripts around breast cancer, scripts around vasectomy, scripts around childbirth and if you only know that script then you live out that script.” After being diagnosed with breast cancer the previous year, Sarah refused to have a script prescribed to her. Intensive radiotherapy sessions – typically 20 minutes each, I am told – were dispensed across 15 days with weekend breaks, not to mention the long journey there and back. She approached the treatment as an artist residency, moving into a flat on the hospital site. She made notes after each day of treatment, asked the staff to take photos of her in the machine, photo-documented and kept her breastplate from the hospital. 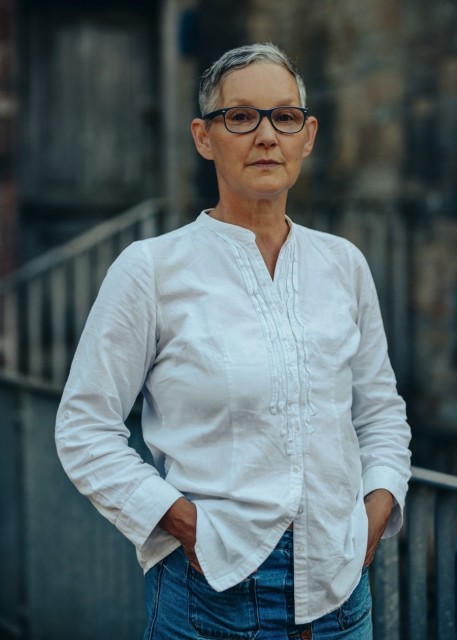 “I created a narrative that wasn’t the script”, Scaife continues. “I did all the things I know artists do in those situations. By bringing all those tools and processes I knew from doing residencies in the past to my own personal life, it became – though it feels quite odd to say – a really positive, enjoyable experience across three weeks of connection with people, opening up, having great conversations and reflecting.”

Although within an entirely different context, Jamboree encourages those threads of connecting which Scaife “can feel the rippling effect of already.” Almost with pride, she recognises the excitement of a national event created by Plymouth-based artists. “It’s so often the other way around, the South-West going to London or an urban centre. There’s quite a big traditional arts scene here which serves its purpose, but to have this art world come to us is really exciting. This quality of contribution is quite overwhelming.”

“Since moving to Plymouth over a decade ago, LOW PROFILE now see the burgeoning cultural status there as a ‘massive shift’”

It is true that cities within the region are quietly rumbling with excitement; since moving to Plymouth over a decade ago, LOW PROFILE now see the burgeoning cultural status there as a “massive shift.” Across this period, the duo have actively nurtured the local arts scene, from numerous participant projects to setting up residencies in their homes. “Although we love living in Plymouth and working in the South-West, meeting and working with brilliant people based here”, says Dobbs, “we wanted to find an efficient way of re-connecting to people across the country.”

Jamboree doesn’t just offer an efficient way of reconnecting but an organic one, encouraging those natural conversations that simply strike up when waiting dozily in the coffee queue or sharing toothpaste with a fellow stranger in the morning. It creates what Léonie Hampton describes as “a really gentle friendliness among everyone – I’ve never felt that before, so it feels special within the industry of art.” Despite being based in Tavistock for six years, the photographer acknowledges her work is still very London centric. Here, not only can she link to a broader network but acquaint herself with more local colleagues in a “very warm and enlightening space. There doesn’t seem to be a feeling of competitiveness or hierarchy; everyone is meeting on a very human level.” 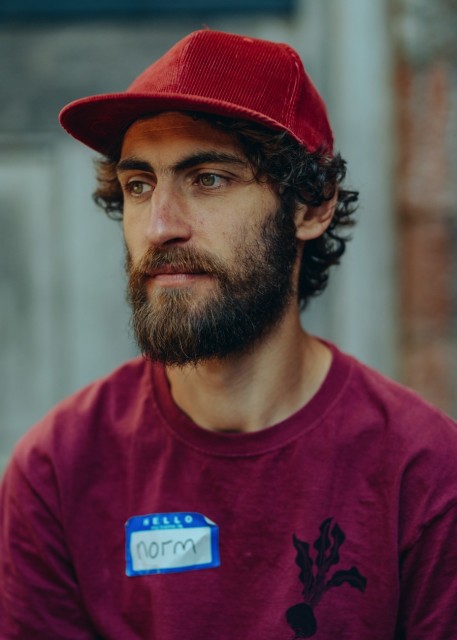 Warmth, friendliness, human; these are words that bounce and echo throughout the multitude of conversations. It is clear a sense of real community between comrades has rapidly fostered on a level grounding. Presentations, talks and workshops take place across each day with the hope rather than the obligation of people attending; dip in, dip out and ruminate in between. Non- hierarchy is actively encouraged by the programme, from communal making activities to the democratically timed presentation slides. The walking talks are guided by facilitators who, instead of guiding, do little more than cue or suggest. Prompts hang loosely in the air and it is up to the participants to delve into them – through words, movement and even silence on some occasions – down whichever path they may choose.

Such structure is described as a “leap” compared to the previous Jamboree by Norman Buchan (above), who is attending this year through one of 36 bursaries allocated across the country. He explains the difference to the inaugural Jamboree seminars, where “you’re sat around a table and being told that it’s a discussion but there is someone come in from London and they’re sat at the head of the table. It still puts parameters on it or we put parameters on ourselves because of it, because we want to behave well, because we want to be well-behaved artists”, he laughs. “That’s not really happening here.”

“Jamboree may aim to diffuse barriers but cannot dissolve them entirely”

Buchan describes his own art practice as somewhat stunted, located in the feeling of being “on the wrong side of the future. On the basic levels of identity and politics, I’m this white heterosexual man. It’s difficult to see value in my perspective, which has been represented and the dominant voice for so long.” Though, over the last couple of days, his understanding in being an artist has shifted, through listening to “methodologies for putting other people in front of you, having them at the forefront of the work and being a facilitator for that. It’s given me a framework which I didn’t come up with by myself.” It is enabled in an environment containing what he describes as “a whole spectrum, a great library of minds.”

Within the parameters of a four-day programme, how far can this spectrum be representative of the artist community at large? It is an issue Ria Hartley, an interdisciplinary artist based in Manchester, finds consistently present. “I always find it a little bit sad that in a big crowd of people I’m one of very few people of colour and I often question why that is. Why are there not more people from diverse backgrounds here? Did the message not reach them or did this not appeal to them? Did they feel like they wouldn’t be represented, or are we lacking those voices in the arts generally?” It is a point of interrogation necessary within all industries, where a lack of neuro-diversity is symptomatic of the larger frameworks failing to be inclusive. Jamboree may aim to diffuse barriers but cannot dissolve them entirely.

Through being able to participate in the programme themselves, Dobbs of LOW PROFILE says they are able to be “looking and asking questions about who is in the room, who isn’t in the room.” For the next occasion, it is their aim to offer more bursaries with organisations across the country, to keep costs low and to hope word-of-mouth reaches wider networks through the ones made here. “I do think that conversation is being had already within this group of people,’ says Hartley. “I’ve heard a lot of people’s voices who were very aware of who they were, what their identities are and of their relationship with making room for other’s identities, which was really good to hear.” Having recently set-up their own initiative, Ecologies of Care, Hartley finds “a huge essence on self-care here; it’s not really spoken about but I feel extremely well cared for.”

Elena Brake, an artist living in Plymouth, finds this “calm nurturing environment” one in which open dialogues are enabled. “There are a lot of different opinions that don’t necessarily agree with each other. It can become conflicted without becoming heated and we are able to talk through things. It’s made me think a lot deeper about what it is I’m doing.” Elena takes a socially- engaged approach with her work, which heavily involves participant involvement and the desire to ignite people’s curiosity in “enchanting, everyday life.” The framework over this weekend has driven her to question further, to investigate her agenda and role in working with different audiences.

If each day of conversations hasn’t revealed these professional and personal benefits, the resolutions the participants write on the last day certainly do. In a teary, final speech by Dobbs and Rose, they read out what everyone will say both goodbye and hello to after Jamboree. Goodbyes to closed chapters, exclusive institutions and inequality, to feeling unworthy of getting opportunities, to fitting into the system, to 71 percent of artists getting no fee for publicly funding projects, to doubt. The hellos are to free, unmediated artist-to-artist conversations without agenda, to flattened hierarchy, to our own terms and conditions, to the f- word: funding, to fair play, ecologies, payment policies and biodiversity, to proper inclusion, to having each other’s backs.

The room is charged with emotion and an applause so long it makes my palms hurt. People slowly, reluctantly, begin their farewells and see-you-soons, having entered a space as colleagues and now leaving together as comrades. It is testament to the strong nexus built over just four days. As Rose of LOW PROFILE observes, “Jamboree is really not ours anymore. It’s collectively become something of which we hope everyone here has a sense of ownership.”

Eva attended Jamboree 2018 on the Dartington Estate near Totnes, Devon, from Thursday 28 June until Sunday 1 July 2018